I was just re-reading my September post about the things I hoped I would do differently with my second baby. Some of the goals seem completely manageable, even in retrospect. And others, well, clearly I was dreaming. I looked back on that post and just laughed and laughed. Sigh.

Let’s revisit these goals, shall we?

Here are the five objectives I set out for Baby Number Two:

HAHAHAHAHAHAHA. How did I think I was going to achieve this? Sure, newborn babies will sleep anywhere, but once they are past the incredibly-drowsy-will-sleep-anywhere phase, babies generally do not like to nap in cribs. There are exceptions to this rule, of course, but this generally applies.

It is possible to encourage young babies to nap in their cribs, but usually this involves nursing, rocking, soothing, and other such comfort measures that take time and quietude. Where did I think my toddler would be during these times? On vacation? Making me lunch? Playing quietly and responsibly by herself? Good one, me.*

Well, we certainly tried with this one. Baby Number Two hates pacifiers. We tried and tried. We bought every kind of soother available in this country. We dipped them in breastmilk. We begged and pleaded. In the end, he used me as a pacifier instead, until he outgrew the need to comfort himself this way. I’m two-for-two in the failure department so far.

Success! We bought an Ergo, since we hated our other baby carrier, and we’ve used it numerous times, even though it’s been ridiculously cold outside for four months. We did it!

Another success, although I don’t think I can pat myself on the back too much for this one. Baby Number Two figured out how to nurse right away, and never looked back. You don’t get to be nineteen pounds by four months by being an unenthusiastic eater.

Yeeeah, this didn’t work out so well either. I certainly didn’t push myself to do too much with two kids, but I definitely haven’t been easy on myself. This one is a work in progress.

So, I’ve had mixed results. But all in all, it’s mostly been a success. I have a happy baby and thriving toddler. I can’t ask for much more than that.** 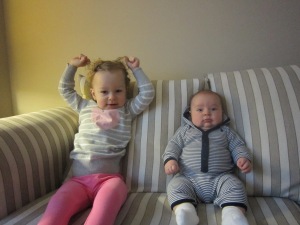 *The baby has actually started napping fairly well in his crib, at just over four months. So we eventually achieved this goal.
**Except sleep. I can, and I do, ask for sleep.