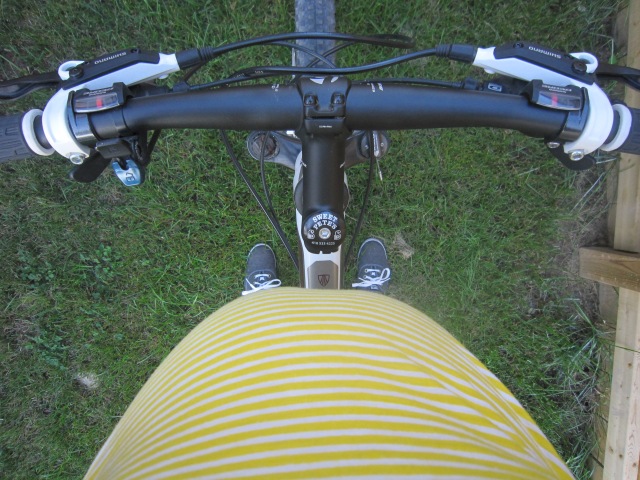 Baby and me…off for a ride!

I made sure to add the word “hope” to the title of this post, because if there is one thing I’ve learned in my 24 months of parenting, it’s that babies have their own agendas. You can have all sorts of intentions but in the end, you’ll save your sanity if you just do what works. Flexibility is the name of the game.

Also, I probably could have saved myself some time and just written that with my second baby, I’m going to chill out more. For instance, I wouldn’t have been riding a bike this late in my pregnancy with C. I was just too nervous about falls and crashes. This time I’ve mellowed, and although I’m careful on my bike, I’m definitely not stopping yet. That’s the beauty of the second baby.

That said, there are a few specific things that I did with C that I’m hoping to avoid this time around. Sure, we muddled through all right, but it would be nice to avoid some of the pitfalls we encountered last time. That way we can have the time to try to fix all the new mistakes we’ll surely make with Baby #2.

1) Naps in the Crib.
C was always a really good night sleeper. She was always easy to put down in her basinette (and later her crib) and she only woke up when she was hungry or teething. But naps were a different story. She seemed to need movement to nap, and so I indulged her, first in a vibrating chair, then in a swing, and sometimes in a car or stroller. This became tricky when we took her on a ski trip when she was five months old. Either we had to bounce her to sleep in a carrier (and she hated carriers) or Pete had to take her out in the Chariot for an hour-long cross-country-ski-nap. She was still napping three times a day at that point. He got A LOT of exercise that weekend.

2) Introduce a Pacifier Earlier.
We were so afraid of jeopardizing our breastfeeding efforts that we didn’t introduce a pacifier early enough. But she must have had a strong sucking need, because once we successfully got her using a pacifier (at about four months), she was a much happier baby.

3) Use a Baby Carrier.
C was never really into baby carriers. She tolerated a few walks in a sling when she was a few weeks old, but after that, she put her foot down. This time, I’m hoping that if I invest in a good-quality carrier and put the baby in it more often, it will go more smoothly. Because I’m sure that with a toddler running around, it will be a lifesaver to have the new baby in a carrier once in a while.

4) Relax about Feeding.
I had a really difficult time breastfeeding, for the entire nine months that I managed to do it. I won’t go into details here, but suffice it to say that while I would like to breastfeed this baby, I’m not going to stress about it. I’ll do my best. But I won’t beat myself up if I have to use a bottle now and then. And probably (or at least I hope) that if I go into it with a more relaxed attitude, it will be easier this time.

5) Go Easier on Myself.
I did all sorts of things in the early days with C that probably weren’t in my best interest. I tried to cook, clean, bake, read, run errands, exercise, socialize, and have overnight guests to visit. Two weeks after I gave birth we were out hiking in caves on a very ill-advised outing. I took three-week-old C out to vote in a provincial election. It was all too much for an incredibly sleep-deprived new mom. It caught up with me when she was about seven weeks old. I started hallucinating and I genuinely believed I would die of exhaustion. Not this time. My only goals for the first three months are to keep two children alive and relatively happy. The end.

And now, a question: Does anyone have any tips on transitioning from one child to two?

Babies attract a lot of attention.  They’re little, they’re cute, they’re (usually) smiley, and they toddle around in unpredictable ways.  They’re fun to watch.  Usually, the kind of attention C gets while out in public is pretty standard.

How old is she? (Or he, since she’s follically challenged)

Is she walking yet?

That type of comment is pretty typical.  However, Pete and I took C with us to an appointment at Toronto General Hospital and as I was waiting to go into a washroom with little C, an Eastern European woman in her early ’70s stopped me and began firing questions at me:

How old is she?

Is she your first?

I told Pete what the old woman had said and he seemed equally confused.

I asked, “does that lady think C’s going to track people down in the desert using only her cunning? Like the show where people are dropped off in the middle of nowhere and have to outrun that intense, cowboy-hatted guy?”

Pete replied: “You’re thinking of Mantracker.  I don’t think that lady means C’s going to be a mantracker.” 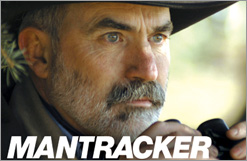 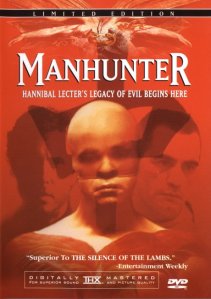 “I think she meant that C is going to be boy crazy, ” I said to Pete.

Ugh, I think I prefer the first two scenarios.